Following the meeting the was held in Lagos by the All Progressives Congress (APC) leaders and presidential aspirants from the South West last night. The party resolved to ensure that the geo-political zone produces Nigeria’s next president in 2023.

They also affirmed the right of every one of the contenders to pursue his ambition, but advised the gladiators to eschew acrimony and abuse in the build-up to this month’s primaries.

Each set of forms goes for N100 million.

Many of the aspirants purchased the forms through proxies.

It was said yesterday that more aspirants might join the queue soon.

Yesterday’s meeting of APC South West leaders was convened by former Osun State Governor Bisi Akande and his Ogun counterpart Aremo Olusegun Osoba to douse the anxiety generated by the growing number of aspirants from the same political family and background.

In attendance were APC National Leader Asiwaju Bola Tinubu, Vice President Yemi Osinbajo, Senator Ibikunle Amosu, and Ekiti State Governor Kayode Fayemi, all of who have purchased their expression of interest and nomination forms for the presidential primaries. 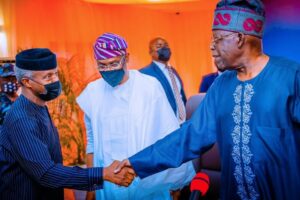 A source close to the conveners said the meeting was successful.

He said: “They (aspirants) freely expressed themselves. They spoke their minds. It was agreed that they were free to pursue their ambitions. But the leaders emphasised the commitment to the emergence of the next APC presidential candidate from the Southwest.”

The source added: “The aspirants were admonished to pursue their legitimate interests without abusing one another. They called for decorum.

“It was also agreed that the aspirants should meet regularly to review events and situations. Contrary to feelings in some places, the meeting was not convened to make aspirants withdraw from the race.” 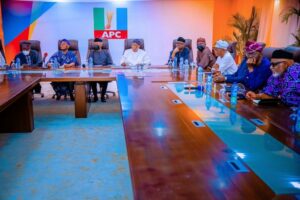 LOVE AT FIRST SIGHT:Temi Otedola says she knew Mr Eazi was ‘the one’