Popular Nigerian media personality, Noble Igwe recently put his legs on display during an outing with his wife, Chioma Otisi.

The celebrity couple attended a music concert over the weekend, and Noble brought out his A-game fashion wise as he rocked a bad boy short which showed off his bare legs.

He took to his Instagram page to share a photo of himself posing with his wife at the event and captioned it,

“Last night, Chairman and I were out to see Asa. I knew she was going to look pretty in pink but trust me to be legs ahead.”

See the photo below, 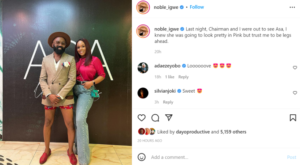 A while ago, Noble Igwe took his social media page to share his opinion about Lagos and social relevancy.

According to Noble, relevance matters in Lagos and once people think you are no longer a significant figure, they ditch you.

He went on to advise people at the top to “bill” those who want to associate with them because once they lose their relevance, people will forget about them.

He wrote on his Instastories,

“Lagos is a city of relevancy.

When you are at the top/relevant, bill them because once they think you no longer matter, they don’t bother with your anymore.