(VIDEO): One dead, others injured as armed robbers disguised as NDLEA invades hotel in Lagos

Lodgers at Mambillah hotel in Ikorodu, Lagos, are counting their losses after they were attacked by armed robbers in NDLEA uniforms.

It was gathered the incident happened on Tuesday, May 10. A source said, “The men stormed the hotel in NDLEA vests and raided the entire hotel. A guest was shot in the process and was confirmed dead at the hospital.

Other guest sustained various injuries. Their valuables were also carted away by the armed robbers.

We need the relevant authorities to look into the incessant rate of these attacks in the country.” 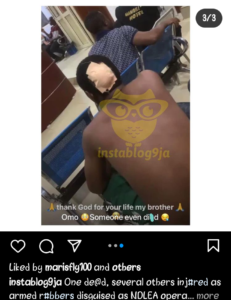 Doctor who was allegedly sent by Suleiman to kill Stephanie Otobo, speaks out

Child who was bleached by Mom , develops chronic kidney disease

Child who was bleached by Mom , develops chronic kidney disease