The Grammy award winning singer who released the first single off his highly anticipated album, ‘Love, Damini’ on Friday, May 13; the same day Davido released his first single ‘Stand Strong’ off his own forthcoming album too, is having quite the moment.

In the early hours of its release, ‘Stand Strong’ had topped the chart for new releases of all genres on Apple Music, leaving ‘Last Last’ at the number three spot. Davido had responded to the news by hailing himself as number 001. 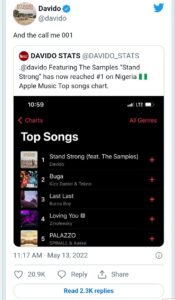 A few hours later, Burnaboy earned the top spot on the Apple Music chart, dethroning Davido’s ‘Stand Strong’ to the second position. He made sure to share the news via his Twitter handle, accompanied by laughing emojis. 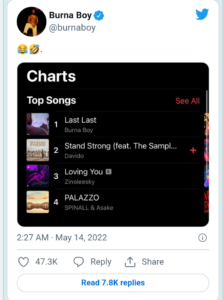