Davido called out for gifting daughter, Imade a toy that looks like Burna boy

Highly-rated Nigerian singer, Davido has been dragged by a netizen for gifting his daughter, Imade a toy that has a striking resemblance with Burna Boy.

According to the Twitter user identified by his handle as @Kinging_xx, Davido presented the toy to Imade as a birthday gift.

“No way Davido gifted his daughter “imade” our odogwu “Burna boy” as a Toy on her birthday?😭” The netizen wrote. 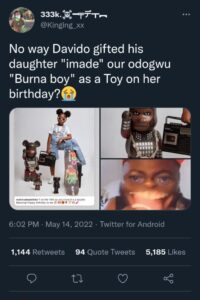 Davido had taken to social media to celebrate his daughter, Imade’s birthday on 14th May. Meanwhile, the crooner’s recent track, Stand Strong has continued to send shivers down the spine of his fans. 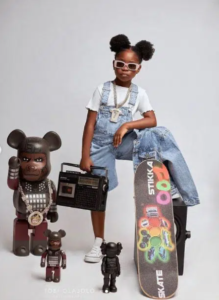 Full list of winners at the AMVCA awards 2022 (photos)

Funke Akindele finally reveals the names of her Twins (Video)

Funke Akindele finally reveals the names of her Twins (Video)