Man steps out with the face of his girlfriend printed on his Shirt.

A faithful boyfriend has decided to show all and sundry how much he loves his girlfriend as he dons a shirt with a picture of her on it. 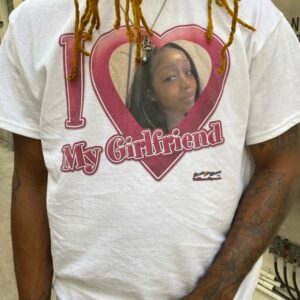 Unlike most guys who have taken to being unfaithful and hiding their relationship status, the young man has decided to let the whole world know just how much he loves his partner.

Stenciled on the t-shirts is a declaration of his love for his partner with a picture of her on it so that people can see whom he’s in love with.

The man identified with the Twitter handle, @NeglectNaim shared a picture of him wearing the t-shirt. 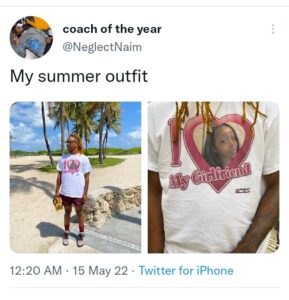 Netizens have lauded the young man’s loyalty and affection for his partner. Ladies have taken to the comment section to advise other guys to follow suit.

NDLEA arrests the 59-years-old woman, who is the leader of a major drug cartel in Delta state (Photos).

Who is Aunty U and Aunty I??. More Details on Rita Dominic’s marriage crisis saga

Who is Aunty U and Aunty I??. More Details on Rita Dominic's marriage crisis saga