A photo of Comedienne Helen Paul has gone viral on Twitter with tweeps wondering if she is going through domestic violence in her marriage.

The mother of four hours ago lamented over the plight of business owners in Nigeria.

“Only in Nigeria where you fuel your generator for in your business and use the profit from the business to pay NEPA Bill”, she cried out.

Responding to her post, a Twitter user, Ette Obong, who noticed her red and swollen eyes said:

The tweet has since gone viral with mixed reactions from Netizens.

One Bukky wrote “Aft first, I thought it was a makeover, but on another look, You just never know”

One Martin wrote ” Is red eye a sign of domestic violence? Her red eye could happen through other means. Think outside the box na.”

The comedienne is yet to react at the time of this report according to gistlover. 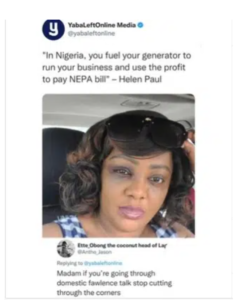