A man identified as Femi on Twitter has revealed the shocking discovery he made about his wife and her biological father.

According to him, he found out that her father had been sleeping with her and their first son actually belongs to her father and not him.

“I Initially thought the man was sexually abusing his kids but turns out, it was a family thing. When I urged my ex wife to speak up about her fathers assault, her sister Yetunde Olobayo and Tobi told her to keep quiet.

I’m really grateful that I escaped the clutches of that wretched Olobayo Family. How can a whole “Royal Family” be okay with the king sleeping with his daughters?

My ex wife. Tried to make me friends with her side dude. This was before I found out that our CHILD was fathered by her own biological Father.” 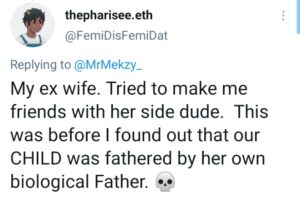 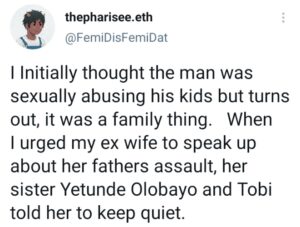