Actress Yvonne Jegede has narrated how she was nearly robbed in traffic in Lagos.

According to the her posts on social media, she was nearly attacked by guy who jumped out from under a bridge.

Luckily the traffic moved and she evaded the attack.

She further advised motorists to never drive on the fast lane and always be between other cars. 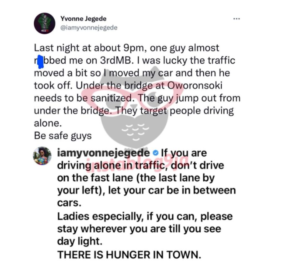