Maureen Esisi has reacted to the taunting messages she received from trolls after her ex-husband, Blossom Chukwujekwu remarried on Friday.

The popular fashion designer reacted by sharing the screenshots of the vile messages with her followers on Instagram.

Some of the messages she received read: “You are pained that your husband left you and married a better woman. Please don’t wet your pillows this night with tears.”

“Lol rest and be alright.. He has moved on. You too do same. He loves her and she’s beautiful in his eyes. She won you didn’t.”

According to her, she received the messages just after Blossom got married to Pastor Ehinome in a ceremony that took place in Benin city on Friday, May 20.

See screenshots of the trolls: 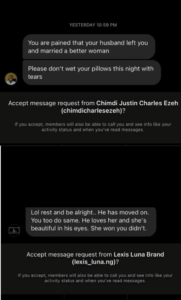 BBNaija star Angel, opens up on why she dropped out of school after two weeks.

BBNaija star Angel, opens up on why she dropped out of school after two weeks.