“Return my money”, Jaruma calls out BBnaija’s Tacha, Esther,Ella, Ubi Franklin and others

Kayamata seller, Hauwa Saidu Mohammed, who is popularly known as Jaruma Empire has called out those she has helped in the past to help her out.

The Aphrodisiac dealer who is no doubt going through tough times and has had poor sales called out talent manager, Ubi Franklin, BBNaija’s reality stars, Tacha, Ella, Esther and others to help her with finances.

According to her, she was there when they needed help and at such they should reciprocate her good act.

Jaruma told them to return the exact amount of money she invested on them.

“Jaruma was there for u when u needed money. Jaruma was good to u. Jaruma helped u. Can u now do the same for Jaruma? Please, I need u now… Pls return my N500,000”.

Jaruma who lost many of her high profile friends following her highly publicized fight with actress, Regina Daniels and her billionaire husband, Ned Nwoko which landed her in prison for days.

Taking to her Instagram page, Jaruma called for help as she admitted that she has been abandoned and left alone by many.

The aphrodisiac seller shared a video of her in what appeared to be a hospital bed as she revealed that she had no help.

According to her, she is an only child and had no one to cry to or lean on.

Jaruma called for Nigerians to pray for her.

“The side of Jaruma that u have never seen before… I am an only child, no one to cry to, no one to help me, no shoulder to lean on therefore I feel so sad & I feel so alone…. Please pray for Jaruma”. 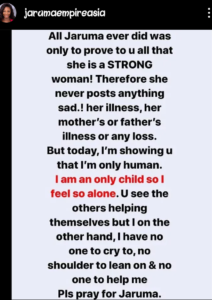 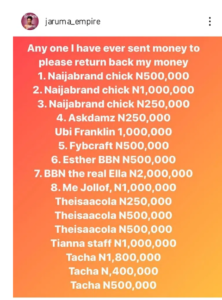