A mum who suffered three miscarriages has revealed how she became pregnant while already pregnant.

Cara Winhold, 30, and her husband Blake, 33, hoped to expand their family after the birth of their son Wyatt in 2018.

The couple, from Texas, US, suffered three miscarriages with one of them nearly proving fatal.

Then Cara fell pregnant in March 2021.

During Cara’s second scan, she discovered she was actually expecting two babies that had been conceived a week apart.

The incredibly rare phenomenon is known as superfetation. It happens when a second, new pregnancy occurs during an initial pregnancy and can occur days or weeks after the first one.

Cara gave birth to Colson just after 4am on October 25, 2021, with Cayden following six minutes later.

Cara, of North Richland Hills, Texas, said that there is currently a striking four pound weight difference between Colson and his little brother Cayden, meaning she buys two different sizes of clothing and nappies.

Cara said: “I got pregnant while I was already pregnant. I said to the doctor, ‘what happened? He wasn’t there the first time. What’s going on?’

“She said that most likely I ovulated twice, released two eggs and they got fertilised at different times, about a week apart.

“I 100% believe it was a miracle just because of everything that happened in my pregnancy journey”.

“I like to believe that it was my way of getting back the two babies that I lost and kind of them helping out in a way”.

“I can’t think of any other explanation to having twins – it was 100% natural and they don’t run in my family. It was a total surprise.”

The former teacher miscarried a child in 2019, another in 2020 that almost cost her life, and another in February 2021.

She discovered she was expecting again the following month, March 2021.

Cara said: “My doctor had me come in for a scan at five weeks just to make sure everything was ok and on that scan there was just one baby.

“Because of my history she wanted to see me again in two more weeks just to check and make sure there was a heartbeat.” 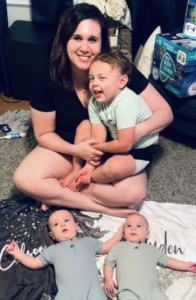 When she returned with her husband seven weeks into her pregnancy, they were told that there were two babies.

“I broke down in tears and cried. I was overwhelmed, confused, but very happy,” Cara said.

“My husband was in shock. On the very first scan there was a sac with one baby and then when I went back there was a really tiny little sac in the corner that had another baby in it”.

“You could see baby A [Colson] was more developed, whereas the other one was like a tiny dot.”

Cara said her seven-month-old boys have always been different sizes as towards the end of her pregnancy Colson was two weeks ahead of his little brother in terms of growth.

Cara advises mothers who may relate to her story not to give up if they feel that having children is part of their story. 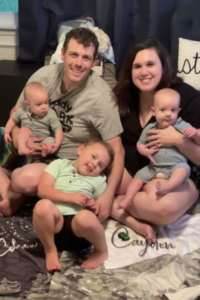 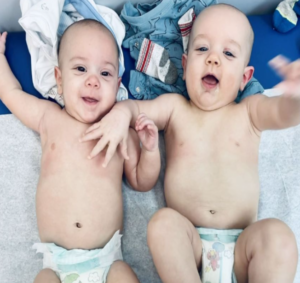 “If it’s in your story and your heart and calling then don’t give up on it because we didn’t and we got a huge surprise and a wonderful miracle in the process.

“I know it’s different for everybody but, I never expected to be a twin mom or have all boys.But I’m blessed with a house of boys.”

“They want to scatter”, Annie Idibia faults Instagram glitch, insists things a good between her and 2baba

"They want to scatter", Annie Idibia faults Instagram glitch, insists things a good between her and 2baba