Nigerian actor Jim Iyke has reacted to the rumours that he had converted to Islam.

The movie star took to his Instagram page on Thursday, June 2, 2022, where he debunked the rumours.

According to the actor, the blogger who peddled the rumours took out his photos from a movie he recently made in Ghana.

“Hello everyone I felt it is just necessary to address a certain rumour that has been making the rounds lately. Usually, I don’t pay attention to these rumours but certain lines must not be crossed,” he said.

“I made a month ago in Ghana about a religious fanatic. Someone took the pictures from that movie and it ended up in the hands of a rather unscrupulous blogger. While I have no issues with any religion, I have no intention, not now or ever to convert my faith.”

“I don’t understand why anyone would want to peddle these rumours but they are certain lines you should not cross. So whoever is peddling these rumours should get it together. We are too busy for this BS.”

This is not the first time the actor’s movie will be generating mixed reactions before its release. 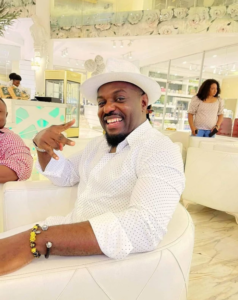 It would be recalled that in 2021 the actor caused a stir online after he had an almost free for all fight with fellow actor Uche Maduagwu.

This was around the period his movie ‘Bad Comments’ was about to hit the cinemas.

A few months later during an interview, the actor revealed that the fight he had with Maduagwu was orchestrated.

“It was orchestrated. I wanted them to paint a picture of what it is like in the social media ecosystem. I can orchestrate anything and you would perceive it. It is about perception,” he said.

The movie star said it was well planned, scripted and executed for the movie he was trying to promote at that time.