According to her, Bobrisky doesn’t rely on adverts or influencing jobs alone, he has streams of income which includes working in the adult movie.

“AM DONE WITH BLUE FILM”. SHE WROTE. 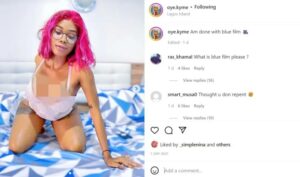