The Labour Party has announced Peter Obi as the only presidential candidate of the party.

This however is coming after reports held that a faction in the party elected one Ambassador Jude Ezenwafor as their flagbearer which apparently appeared as an impediment to the success of Peter Obi.

Many has reacted differently to the claim, the party via its official Facebook page has stated that Peter Obi is the only presidential candidate existing in the party.

It further stated that the rumours about an internal contest for power are sponsored by mischief makers all in a bid to cause distractions.

“MR. PETER OBI REMAINS THE ONLY PRESIDENTIAL CANDIDATE OF LABOUR PARTY NIGERIA , ANY RUMORS SAYING OTHERWISE IS BEING SPONSORED BY MISCHIEF MAKERS TO CAUSE DISTRACTIONS BUT WE REFUSE TO BE DISTRACTED.” 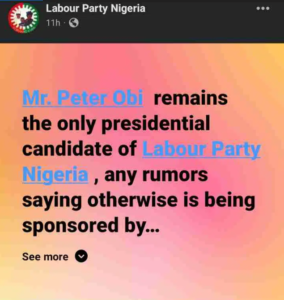