Veteran actress, Chioma Akpotha has left her colleagues laughing after she shared an epic throwback photo of herself.

The 42-year-old thespian had pleaded with her fans to be nice to her as she served them the 1990s look.

“SEE THOSE BROWS. JAS A LIRRU. PLEASE BE NICE WITH YA COMMENTS O, I HAVE AN EXTRA BLOCK BUTTON”.

Taking to her comment section, Kate Henshaw, Adunni Ade, Khafi Gedoni, Anita Joseph and others gushed over her beauty.

Her epic photo isn’t coming as a surprise as Chioma Akpotha is known for her love for old school vibe. 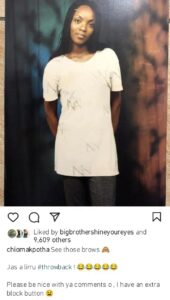 “I COOK, I CLEAN, I SABI NACK”, Nkechi Blessings spills

“I COOK, I CLEAN, I SABI NACK", Nkechi Blessings spills