A viral video captures the moment two men clung to a moving vehicle in Lagos in a bid to settle a score with the driver.

A fight had supposedly broke out between the driver and the two men before he took off in his car. 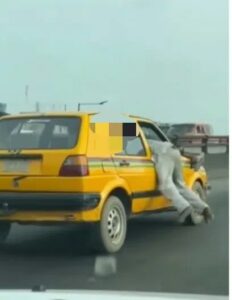 The two men not relenting, or ending the fight without getting even with the driver, decided to cling to the car.

In the video, one of the men could be seen holding on to the side door while the other was on the bonnet of the moving car.

The one holding on to the side door was spotted trying to get in a blow at the driver while the car was still moving.

“The beauty and the beast” – Maraji says as she shares cute mother and son photos.