Mercy Aigbe reveals what really happened between her and Omolara Olutokun after Humiliating herself in public, tenders apology.

One of the videos that surfaced on Instagram captured Larrit and Mercy Aigbe exchanging words of insults. The drama started when Mercy Aigbe mentioned the former’s name.

A new update that got many talking online was Mercy Aigbe’s side of the story which supports or claims her innocence in the fight.

According to the details shared by the actress, Larrit instigated the fight by going overboard with her words. Mercy Aigbe referenced the different times Larrit had tried to bring her down online without a just reason.

She also disclosed how she tried to reach out to Larrit, who was once her favourite customer and vice versa.

After much talk, Mercy Aigbe tendered an apology to her disappointed fans and families who felt she should have handled the situation differently.

Mercy Aigbe humbled herself by apologizing to a famous controversial blogger about the public fight and the drama trailing her marriage.

Mercy Aigbe took to Instagram to plead with Gist Lover to acknowledge her side of the story. From the message, Mercy Aigbe claimed she is a friendly personality who does not encourage violence.

Mercy Aigbe Breaks Silence, Reveals What Really Happened After Humiliating Herself in Public 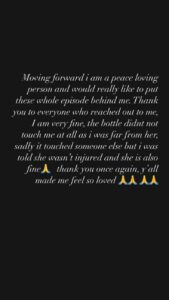 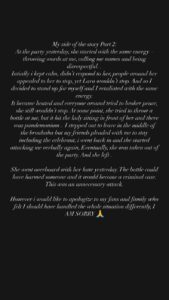 “The story is deep”-Mercy Aigbe Reacts To Viral Video Of Herself Fighting At An Event With Lagos Socialite, Lara Olukotun

“The story is deep”-Mercy Aigbe Reacts To Viral Video Of Herself Fighting At An Event With Lagos Socialite, Lara Olukotun