Actress, Mercy Aigbe has tried to tell her own side of the story after the video of her physical fight with her colleague, Omolara Olutokun, known as Larrit surfaced.

Another drama unfolded as Mercy Aigbe begged Gistlover not to hate her especially without hearing her own side of the story.

The mother of two accused the blogger of only listening to the story of Larrit and in the process of explaining her own side, hinted at why she married her billionaire producer husband, Adekaz.

It can be recalled that netizens dragged Mercy Aigbe online after a full video of her public fight with Larrit surfaced online.

The video started with Larrit and Mercy Aigbe shading each other. The former was reportedly shading Mercy Aigbe for staking a claim on her husband despite being the second wife, while Mercy retaliated by asking the D.J to play a song.

Although the duo did not mention each other’s names at first, Larrit flared up when Mercy Aigbe stood up and said her name. Then, in anger, she threw a bottle at Mercy, who screamed in fear.

The video later captured how Mercy Aigbe was escorted out of the event.

A new development online was captured by controversial blogger, Gistlover, who shared a private conversation she had with Mercy Aigbe.

Following the drama, Mercy Aigbe took to Instagram to plead with Gistlover to acknowledge her side of the story. From the message, Mercy Aigbe claimed she is a friendly personality who does not encourage violence.

When Gistlover challenged Mercy Aigbe of showing off another man’s husband to hurt the first wife, Mercy Aigbe claimed she didn’t flaunt her husband.

She also disclosed that there is more to her marriage to Adekaz. 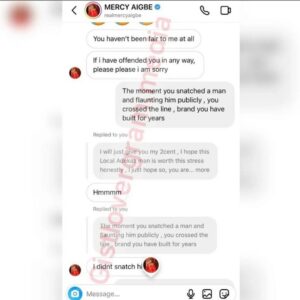 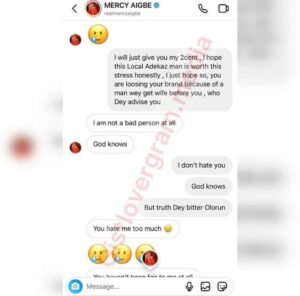 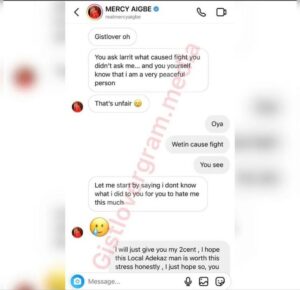 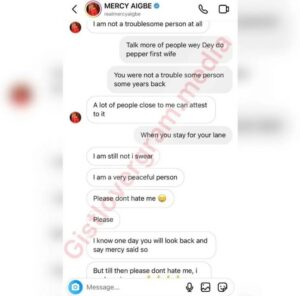 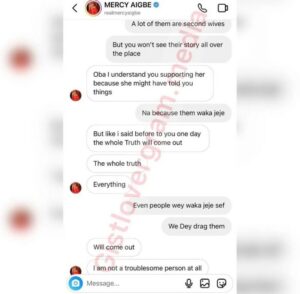 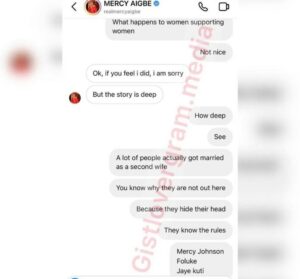