Controversial On-Air-Personality, Daddy Freeze, has stirred a drama online over his reaction to the famous Togolese TikTok star, Bhadie Kelly.

It can be recalled that Bhadie Kelly on social media, has been turning the heads of the Nigerian male folk.

However, teenage Nigerian girls who refused to be intimidated by her have made their version of her viral dance videos that have gotten many talking online.

Reacting to the viral sensation, Daddy Freeze claimed Kelly is an overhyped average looking girl who has taken over the social media timelines.

HE WROTE: “MAKE UNA NO VEX O BUT THIS KELLY GIRL ON MY TIMELINE AND ON MOST OTHER TIMELINES IS WAY OVERHYPED.

AS IN EHN THIS GIRL, NA AVERAGE LOOKING GIRL ABI NA MY EYE” 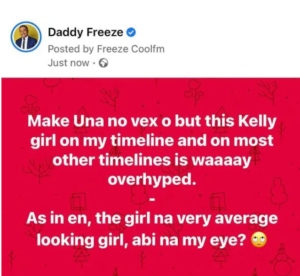