Judy Austin, the second wife of popular Nollywood actor Yul Edochie has stated that critics angry at her are doing so because they’re jobless.

The actress stated this on her Instagram page while asking the Lord to please fix them of their malady.

“I understand that a lot of people are jobless… meaning most people are really really angry and frustrated!! Lord fix them. Amen!! Have a wonderful my bunnies!!!”

Recall that the actress had set the internet haywire after she was revealed as the second wife of Yul Edochie. 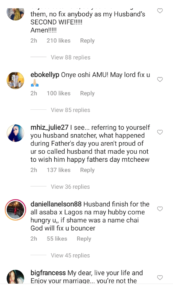 Netizens have been at her doorstep ever since then, lambasting her for getting herself involved with a married man and wrecking the home of another woman.

The actress new comment about why people are angry and frustrated has once again set of angry reactions from netizens who have blasted her, saying that she’s the one who needs fixing.