Queen Naomi, the estranged wife of the Ooni of Ife, has got tongues wagging online as she dances to Kizz Daniel’s hit song, Buga.

The mother of one got many questioning her religion as they claimed she had gone worldly by dancing to such ‘worldly’ song.

Netizens claimed that Queen Naomi, also a prophetess, has backslid because of her dance moves which she claimed was a taunt to her estranged husband’s alleged concubines.

Mixed reactions have trailed the video as many showered appreciation of her undeniable beauty while some dragged her for dancing ‘worldly’.

ms__daf: E dey for her body before… just lil touch to unscrew the button. 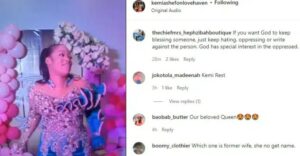 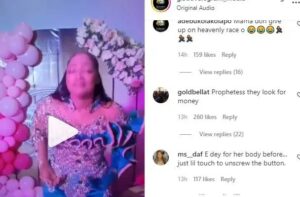