A Catholic priest, Fr. Evaristus Bassey, has caused a stir online after he shared a photo of “Virgin Mary” that allegedly appeared to parishioners at St. Charles Lwanga in Calabar.

The priest shared photos of the “Virgin Mary” on Twitter and said many people, including non-Catholics, “saw her image.”

He claimed that the peculiar event that occurred on Wednesday, June 22, signified God’s presence with them.

“On Wednesday 22-6-2022 the Blessed Virgin Mary appeared in one of our parishes in Calabar, St. Charles Lwanga. It was something more than 100 people witnessed,even a Protestant pastor who came to visit his cousin, the assistant priest.

He took these pictures. The rays around her were too bright for a clear picture. She moved up to the Shrine dedicated to her and then was taken up. It was amazing, the entire aura around the parish, that evening. She didn’t say anything to anyone. But I think she came to assure of God’s presence with us.

Even the rays of light on the premises showed there was something happening. May the prayers of our Blessed Mother help our country Nigeria. Amen.” He tweeted. 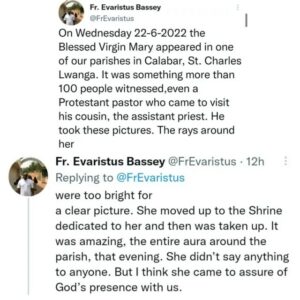 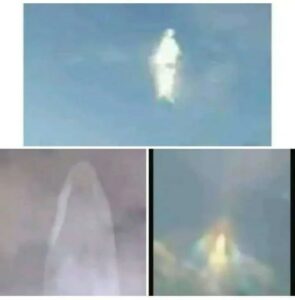 The priest’s tweet stirred quite a number of reactions on the micro-blogging platform. See some comments as you scroll.

A Twitter user @mcgeorge007 wrote, “The virgin Mary that can’t appear in Vatican City, it is only in Africa that she will sees the cloud to appear”.

@Diceydemon, “Virgin Mary in Calabar, who did this to religion”.