“I’m left with no choice than to quit, would be introducing someone else” – Peter Okoye shares thought-provoking note

TNIN recalls that the twin brothers, Peter and Paul Okoye clashed in 2017 and subsequently went their separate ways only to reconcile in November 2021; a move that pleased their fans.

However, months after this reunion, Peter Okoye in a recent tweet hinted at quitting while claiming to have done his best.

He went on to state that he will make an official announcement this weekend. The singer also promised to introduce someone else.

As it stands, netizens are still confused and curious to know what and why he is quitting.

“I AM QUITTING! WOULD BE INTRODUCING SOMEONE ELSE.📌 ANNOUNCING IT OFFICIALLY BY THE WEEKEND! GOD BLESS Y’ALL.”

“SAD! IT’S BEEN GOING ON SINCE LAST YEAR! AND I HAVE DONE MY BEST! AND I AM LEFT WITH NO CHOICE THAN TO QUIT! ANNOUNCING OFFICIAL THIS WEEKEND.” 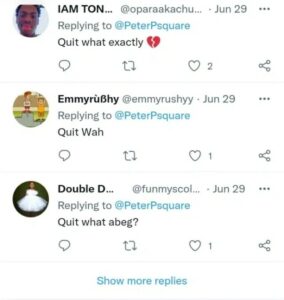 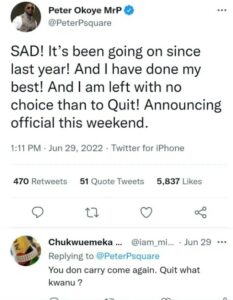