The win sees him retain the UFC middleweight championship.

Adesanya fought against middleweight contender Jared Cannonier at UFC 276 at the T-mobile Arena.

More so, the win for Adesanya means that he has successfully defended his title five times since then. 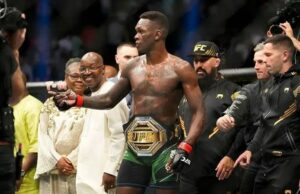 His only loss in a fight was during his unsuccessful step up to light heavyweight, losing to then-champion Jan Blachowicz.

Now, in the last round on Sunday morning, Cannonier struggled to get a takedown while Adesanya was cautious as the crowd got restless.

Though Adesanya landed clean jabs, Cannonier fired back with a flurry of punches.

However, Cannonier failed to complete a takedown and lost by unanimous decision.