The talented Nigerian dancer and entertainer in a post via his official social media page confirmed a new date for the release date for Burna Boy’s fifth studio album captioned ‘Love, Damini’.

You would recall that, few weeks ago, Ghgossip revealed that, Burna Boy’s ‘Love, Damini’ album would be published on Saturday, July 2, 2022 which also happens to be Burna Boy’s birthday.

Music enthusiast were surprised not to get one of the most anticipated projects from Burna Boy but popular dancer and hype man, Poco Lee has today, Saturday, July 2, confirmed a new date via his Insta-story.

Poco Lee in a post whiles celebrating Burna Boy’s birthday shared a new date for the album released. According to Poco Lee, ‘Love, Damini’ would be released on Friday, July 8, 2022 a date which was also confirmed by Ed Sheeran during his performance at Wembley stadium with Burna Boy. 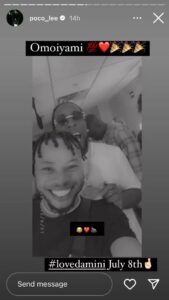