After posting a video in which she was clearly seen flashing her wedding or engagement ring, Nollywood actress Judy Austin has once again come under fire from some online users.

In an effort to inform her followers that she has finished working on a certain film, JudyAustin, Yul Edochie’s second wife, released a video of herself and the cast praying.

Some of her supporters objected when she repeatedly flaunted her ring.

In reaction, @Lindarabella wrote, ‘this one is flaunting ring ni o.’

@Princessgracey wrote: ‘you too like Jesus but you get mind marry another person husband’.

@Ijeoma24 wrote: ‘You’re showing us your Aba made ring’. 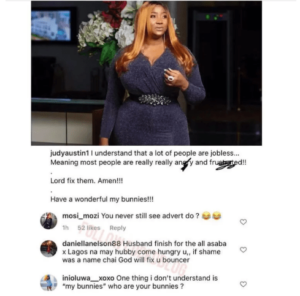 This comes weeks after Judy Austin insulted trolls on her page saying they are jobless and frustrated and they have torn her apart with their reply to her post.

Judy Austin after adding Yul Edochie’s name to her name confidently made a post claiming she understands that a lot of people on the gram are jobless and that means most of them are really angry and frustrated as she prays God fixes them.

Some of these trolls who felt offended by her post have replied to that by dragging her into the mud for getting married to someone’s husband and asking if men got finished that she has to shamelessly settle for someone’s husband.

This marriage of Judy Austin and Yul Edochie is something most fans on the gram are against and she has made things worse by insulting them for being jobless, angry, and frustrated and that has got her dragged all over again.