“I was born gay, am still, and will ever remain gay”.- Uche Maduagwu sparks controversy

Controversial Nollywood actor Uche Maduagwu has claimed again that he is gay, Barely one year after denying his sexuality.

Recall that last year, Uche said he is 100% gay and not even the government can make him deny his sexuality.

In his words; “I was arrested, beaten for 3 hours and told to deny being Gay…I am 1000% GAY not even buhari can take away my Jesus given identity #ImpeachBadPresident”

The actor later publicly denied being gay. In a post on his Instagram page, Uche said he was only fighting for the LGBT community and this has made him lose movie roles, several endorsement deals and his girlfriend.

Uche Maduagwu has made a U-turn, claiming again that he is gay. He made this claim while condemning the Sharia court ruling that sentenced a man in Bauchi to death for being gay.

DEAR PRESIDENT JOE BIDEN, WE NEED THE US GOVERNMENT TO SANCTION PRESIDENT BUHARI AND HIS TOP ADVISERS OVER IGNORING THE FUNDAMENTAL HUMAN RIGHTS OF #LGBT IN NIGERIA, JUST FEW DAYS AGO, A SHARIA COURT SENTENCE #GAY MEN TO BE STONED, IS THIS OUR COUNTRY A #DEMOCRACY OR #BANANA REPUBLIC? YET, OUR PRESIDENT AND HIS CORRUPT MINISTERS KEPT QUIET, HE KEEPS TRAVELING TO DIFFERENT DEVELOPED COUNTRIES LIKE KUNU MOSQUITO, YET HE NEVER BORROW WISDOM FROM THESE COUNTRIES RESPECT FOR HUMAN RIGHT. THE SAME SET OF PEOPLE WHO GIVES JUDGEMENT FOR GAY PEOPLE TO BE STONED ARE THE SAME THAT TAKES LAWS INTO THEIR HANDS ALL IN THE NAME OF CHRISTIAN BLASPHEMY ON MOHAMMED, WHEN WILL THIS MADNESS STOP? 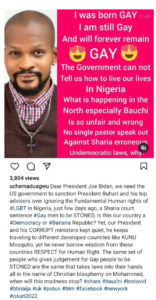 “I feel worthless”.- Nigerian man reacts as his girlfriend receives iPhone 13 and 600k for her birthday from a ‘male bestie’ (screenshots)

“I’m the landlady, I don’t have to rush”.- Bobrisky response to fan asking him why he haven’t moved into his N400m mansion

"I'm the landlady, I don't have to rush".- Bobrisky response to fan asking him why he haven't moved into his N400m mansion