Funny moments a Ram escapes been killed for Salah (Watch)

A ram has put residents on their toes after it escaped from its owner in Ajegunle, Lagos state to the top of a building.

It broke free from where it was kept just as when it was about to be slaughtered for Sallah celebrations by its Muslim owner. 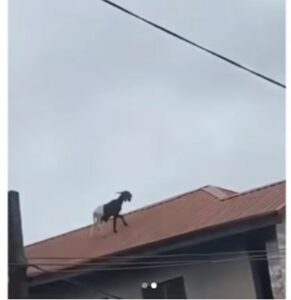 A video which surfaced on social media shows the animal on the roof of a two-storey building in the community.

Residents could be heard expressing shock over how the ram was able to climb to the roof.