A young boy who hawks sachet water has said that he has no intention of doing internet fraud aka Yahoo Yahoo because it is an evil act capable of ruining his life.

He was being interviewed by some adults who asked him if he would consider going into fraud to help his family.

According to the pure water hawker, he does not want to go into internet fraud, but if he ever finds himself doing it as a result of hardship, he would just be involved in the regular yahoo yahoo. 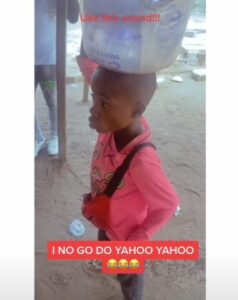 The boy said that he would not consider going into Yahoo Plus because if he does that, they will ask him to use a family member to make money.