A young lady has been seen in a video ordering her boyfriend to move out of a hotel room which she booked for him.

It was gathered that he seized her phone and and is in the habit of always doing that but she got fed up this time around.

A video circulating online shows the lady demanding her phone while insisting that her man leaves the hotel because she paid for the room. 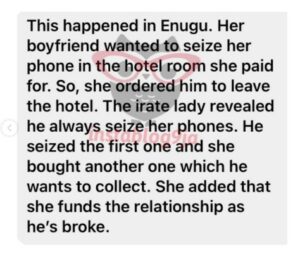 Her boyfriend had reportedly seized her previous phone and she bought the one which he seized again. She claimed to be the one funding the relationship and stated that she would no longer tolerate him.