A Nigerian man has gone online to reveal that he spotted his former secondary school teacher driving an old model Mercedes Benz.

He recorded the moment he saw the man driving his 1993 Benz in Benin, Edo state and recalled how the man talked down on him in school.

The guy who was driving a Lexus said that the teacher taught him in SS1, and he used to say he would never become successful in life. 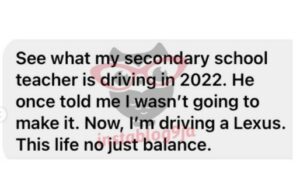 He said the teacher had been driving the car since he was in secondary school and wondered why the man was still using that type of car in 2022.