Watch the moment a policeman drops g#n and engaged in a fist f#ght with a civilian.

A police officer has been seen engaging in a boxing fight with a suspected offender on the streets of an American city.

The law enforcement personnel agreed to leave his gun in the holster and fight the man with his fists. 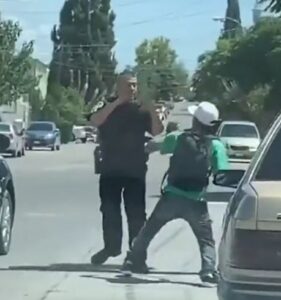 In a video which has gone viral, the officer and the man could be seen throwing punches and some motorists who witnessed the fight recorded it on tape.

At some point, the policeman dropped his bullet proof vest on his patrol car and really got into the physical bout. But when they got tired of fighting, the man calmly walked away.

“I want to be a Lawyer” – Child hawker says he won’t go into Yahoo (Video).