A Nigerian journalist and reporter, Favour Bassey Otu has announced her resignation from Silverbird TV to throw her weight behind the Labour Party presidential candidate, Peter Obi.

She explained that her reason for quitting was so that she could be free to support Obi without being restricted by the ethics of journalism.

The Journalism code of ethics dictates that a journalist must be non-partisan and should not be biased toward any political party, group or persons.

Favour took to her Twitter account to make the announcement as she disclosed her plans for the future.

She wrote; ”They said a journalist must be non-partisan (unbiased and fair). So I resigned my position with @SilverbirdTV to throw my full support on @PeterObi, after the elections next year, I’ll apply for a media job maybe with @channelstv or @ARISEtv or start up my business.” 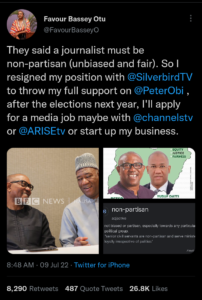