Actress, Chacha Eke seemingly shuts down rumors of her being hospitalized for drug addiction (see details)

Actress, Chacha Eke seems to have reacted to rumours that she has been admitted in a hospital where she is being rehabilitated drug addiction.

The actress who is believed to be suffering from bi polar disorder has been alleged to have been taking drugs to heal herself from her marriage to Austin Faani.

Faceless blogger, Gistlovers had shared screenshots of a chat where it was alleged that Chacha Eke had been receiving treatment at FMC, Asaba.

According to the chats, Chacha Eke is a drug addict and her husband as become tired of her addiction as her children are suffering from her reckless life.

The chat also claimed that all the weed joint in Asaba and aboki know her.

Reacting to it, Chacha Eke shared a video of her sitting pretty in what appears to be her house.

This latest move is to shut down rumours of being hospitalized. 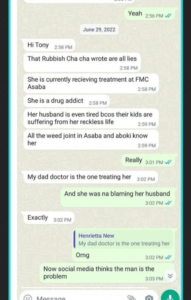