Award-winning Trinidadian-American rapper, Nicki Minaj was forced to flee from a horde of fans after a chaotic meet and greet in London.

The ‘Acaconda’ hitmaker was scheduled to appear at Cafe Koko in Camden on Monday around 11am, but the fans became agitated because she did not arrive until 6pm. 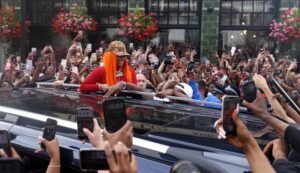 Minaj was also a part of the Wireless Festival’s all-female lineup in Finsbury Park while held over the weekend. Due to her late-coming and the subsequent outrage, the crowded event was eventually cancelled.

However, the major problem her team encountered was how to leave the hundreds of fan that showed up to see her. Minaj hopped up on her van which drove away but not without her supporters ran after her vehicle.