It was learnt that the deceased brother, 35-year-old Chukwudi Josiah Ugwuka, passed away on April 27, 2022, after battling a series of mysterious illnesses and being transferred between hospitals.

A family member who spoke to the Nation on condition of anonymity on Tuesday, July 12, said Ugwuka initially denied having a hand in his brother’s death until he was taken to the shrine. 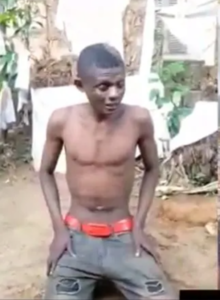 “But when both of them were repeatedly interrogated, the nephew maintained that he is innocent, while Ugwuka continued to accuse him, and also continued to deny that he himself did not have any hand in the death.

“As a result, the villagers had to resort to using traditional means to unravel the truth. They have to take them to a popular shrine at Nando last Sunday, to swear before the deity, to prove their innocence.

“After his nephew had sworn and was vindicated, Ugwuka was hooked and instantly blinded by the deity while swearing, which made him to start confessing immediately. It was during the confession that he revealed that he killed his elder with rat poison because of land dispute.” The relative said.

However, a video that found its way to the internet showed Ugwuka kneeling and confessing at the shrine to killing his brother. 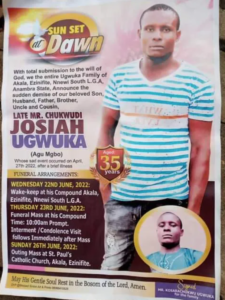 “I poisoned my brother to death with rat poison over land.” He said.