Comedian and skitmaker, Samuel Perry a.k.a Brodashaggi is set to join actress, Sola Sobowale in India.

Recall that yesterday TNIN reported that one of Nollywood’s most sought-after actress, Sola Sobowale was going international.

The “King of Boys” actress made a special announcement on her Instagram page which left many of her colleagues rejoicing with her.

Sola revealed that she would be going to India to join record-breaking Director, Hamisha Daryani Ahuja for her latest project.

Sola Sobowale revealed that she would be surely going to India to film and she would be playing a very dynamic role in the project.

“I AM SO EXCITED TO ANNOUNCE THAT I WILL BE WORKING WITH RECORD BREAKING DIRECTOR/EXEC PRODUCER @HAMISHADARYANIAHUJAON HER UPCOMING PROJECT! AND….GET THIS…WE WILL BE GOING TO INDIA TO FILM! I WILL BE PLAYING A VERY DYNAMIC ROLE IN THIS PROJECT AND CANNOT WAIT FOR YOU TO WATCH IT”.

Speaking on her choice the choice of starring the ace actress in a lead role in the yet-to-be-titled movie, the producer, Ms Daryani, described Sobowale as a legend.

“WHEN I DECIDED TO CAST HER, I WONDERED IF SHE WOULD SHARE MY VISION FOR THIS PROJECT…AND SHE DID! AUNTY SOLA (AS I CALL HER) WILL BRING HER TOP-NOTCH PROFESSIONAL ACTING TO THE PROJECT AND, MORE IMPORTANTLY, HER BEAUTIFUL ENERGY. YOU’LL GET TO SEE HER IN A ROLE THAT FURTHER SHOWCASES HER ACTING RANGE!”

The movie will be shot entirely in India and feature some notable actors.

While it is Ms Sobowale’s debut Bollywood movie role, it is Broda Shaggi’s second, as he made a cameo appearance in Ms Daryani’s ‘NamasteWahala’ movie 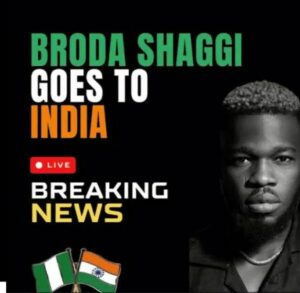