There has been rumours of the wife of Adedimeji Lateef having an escapade with Yomi when she was working with him.

Confirming the reports as untrue, Mo Bimpe stated that Yomi didn’t ask her out until she finished shooting his movie.

According to the thespian, Yomi stated that if he knew she would have turned his proposal down, he would have made his feelings known before shooting the movie with her.

Mo Bimpe made this known while answering a fan’s question on if she is in dispute with him over sex for role allegation.

The screen diva added that she isn’t in talking terms with the actor because he told her to either date her or be enemies with her and she had no choice but to choose the latter.

“NO! IN FACT HE DIDN’T ASK ME OUT TILL WE FINISHED HIS MOVIE I FEATURED IN (THO HE SAID IF HE KNEW I WAS GOING TO TURN HIM DOWN THEN HE WOULD HAVE DONE THAT BEFORE SHOOTING THE MOVIE). WE DON’T RELATE COS HE INSISTED ON EITHER DATING ME OR BEING ENEMIES AND I HAD TO CHOOSE”. 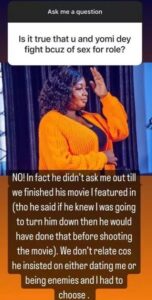 Singer, Davido almost gets into a fight as he storms Osun State [Video]