Actress Eve Esin has reacted to a recent report on a blog about her alleged romance with Colleague, Chacha Eke’s estranged husband, Austin Faani.

A faceless blogger rolled out reports on Chacha Eke and her ex-husband, Austin following their split.

The blogger illuminated how Chacha Eke snatched Austin, who was a movie editor then from her colleague, Eve Esin and later got married to him.

According to the blogger, Chacha did this in a bid to rise to the top especially because of the ill-treatment she received from Eve Esin.

The blogger further disclosed how Eve Esin of sleeping with Austin then for movie roles.

Reacting, In an already-deleted Instagram post, Eve Esin debunked the rumours of her having any carnal knowledge of Austin Faani.

The movie star also set the record straight with regards to other rumours that she allegedly brought Chacha Eke into Nollywood and housed her.

I HAVE NEVER HAD ANY CARNAL KNOWLEDGE OF AUSTIN FAANI. CHA AND FAANI ARE MY FRIENDS.

I NEVER BROUGHT CHA TO NOLLYWOOD, WE MET ON SET AND BECAME FRIENDS.

CHA NEVER LIVED WITH ME IN PHC. A FRIEND VISITS A FRIEND. HOW DID FRIENDSHIP TRANSLATE TO BEING A BOSS?”

The Actress urged the public to let Chacha Eke and Austin Faani heal. Eve also cautioned people to leave her out of stories that don’t concern her as she can’t be involved in what she knows nothing about. 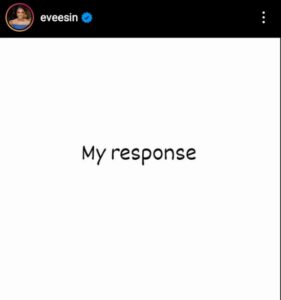 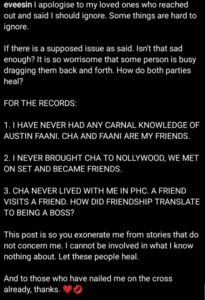