Fast-rising Nigerian singer, Magixx, has tendered an open apology to his boss, Don Jazzy, fans and Mavin Records for his unbecoming conduct online on Friday.

The Mavin signee had rained insults on fans who tried to troll him when he dropped a tweet which was interpreted as him commenting on the Buju, Ruger and Omah Lay drama.

Twitter influencers Mbah and Valking took to his comment section to give him advise and troll him for the comment but he took it personal and went on attack mode.

Hours after the messy online exchange, Magixx apologised for his actions and said he regrets it because he could have handled everything in a better way.

HE WROTE; ”MY ACTIONS TODAY, I REALLY DO REGRET… NOT BECAUSE OF ANYTHING, BUT BECAUSE I KNOW BETTER AND COULD HAVE HANDLED THINGS BETTER.

THIS IS A SINCERE APOLOGY TO EVERYONE, DONJAZZY AND TO THE MAVIN FAMILY. I’M TRULY SORRY. PERMIT ME TO BE HUMAN THIS ONCE.” 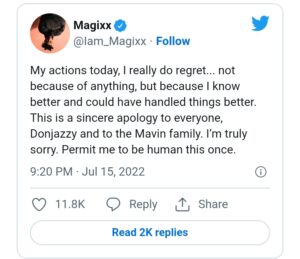 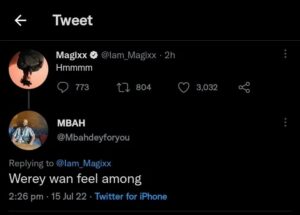 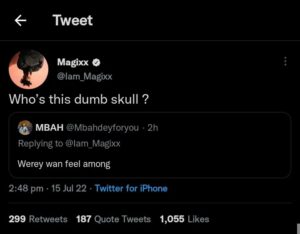