Popular Nollywood actress, Nkechi Blessing Sunday is in happy mood as her anonymous admirer makes an exceptional pledge to her.

The actress had taken to her social media status to say that she wants a Range Rover and pleaded that someone get it for her.

Her anonymous man who has been surprising her with assorted gifts has once again turned up for her.

From a chat she shared, the anonymous admirer, whose identify is as yet unknown, asked her if it’s really the car she wants and not another one to which she affirmed.

The man, although didn’t make a definite pledge, he hinted at getting the range Rover for her. 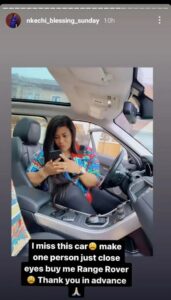 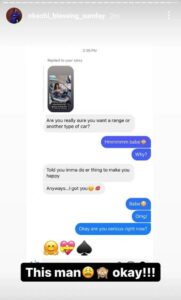 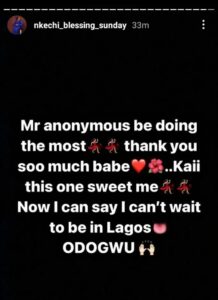