Controversial artiste, Habeeb Okikiola, a.k.a Portable has been dragged online after he taunted the All Progressives Congress (APC) following their loss in Osun governorship election.

The singer had earlier endorsed the re-election bid of Gboyega Oyetola, the governor, and led various campaigns for him in Osogbo, the state capital.

But the governor lost to Ademola Adeleke of the Peoples Democratic Party (PDP) at the polls.

Ignoring his back and forth outpour over his campaigning for Oyetola, who was in the race with the uncle of his one-time benefactor, Davido, Portable recently celebrated Ademola, the Dancing Senator.

In his congratulatory post, the Zazu crooner played the song he did for Adeleke in 2018 when he first campaigned to be the governor of Osun state.

In the wake of the controversy trailing his congratulatory message, a video wherein he appeared to be mocking the ruling party surfaced on social media.

The controversial singer was captured dancing wildly while taunting the presidential candidate of the APC.

But, many have since attacked Portable online, saying he should be careful about his utterances against Tinubu and APC. 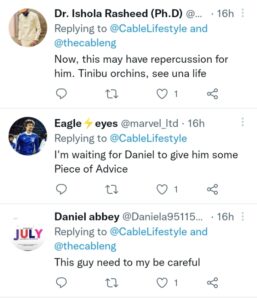