Owing to several observations, netizens are already doubting the genuinity of Bryann and Daniella’s ship, and have jointly offered a piece of advice to the latter.

On Instagram, @tinagift77 noted that it was obvious Bryann isn’t interested in Daniella. She also recounted when the former revealed at the beginning of the show that Daniella was the one after him.

Also, she advised that Daniella should part ways with Bryann and seize the opportunity she is having with other ‘classic’ housemates who are interested in her.

A dialogue which ensued below the comment section of a loved up video of Bryann and Daniella reads:

faithposh5493 @brendabrownatt: Too sure even from d beginning Bryaan said she’s d one after him,,d babe should avoid him coz more uys are waiting for her outside,, classic ones sef.” 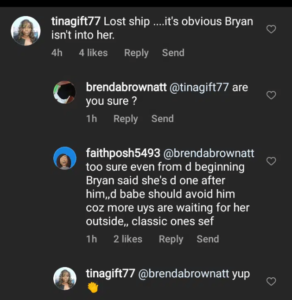 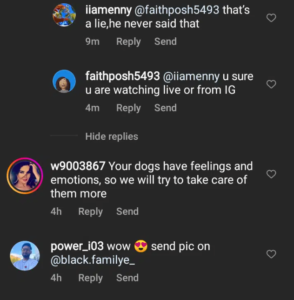