A Nigerian lady has cried out about feeling guilty because she had an affair with her newly married friend’s husband and got pregnant.

She said it happened when they were making the wedding arrangements in December last year and she had a brief moment of weakness which led her to sleeping with the man.

According to the woman, she was one of the bridesmaids at the wedding and when she informed the man that she was pregnant, he wanted her to remove it but she refused.

She had the baby in September this year and her newly-wed friend organised a baby shower for her without knowing that her husband is the child’s father.

The bridesmaid said she feels like telling her friend the truth because she has been very good to her and she does not think she can continue to keep it a secret.

In her words; ‘‘My friend got married in December last year and I was one of the bridesmaids. During the preparations of the wedding I had a moment of weakness and slept with her man, which led to me falling pregnant.

The guy tried to get me to abort but I refused because I do not believe in killing innocent souls. I gave birth in September this year. My friend is the one who organised a babyshower. She doesn’t know that my baby is her stepchild.

My problem is guilt is eating me alive. I swore to my baby daddy that his wife will never know, but seeing her so supportive and sisterly to me is breaking my heart. She confides in me about everything, including her family’s finances and future plans. I don’t know if I can keep this secret any longer.

My friend is weak and I know she will hit a mental breakdown if she finds out. I don’t know how to handle this. Please advise me. You don’t have to remind me that I’m a bad friend, I know that already. I just want you to help me to get out of this guilt. Leave judging to God because no one is perfect .” 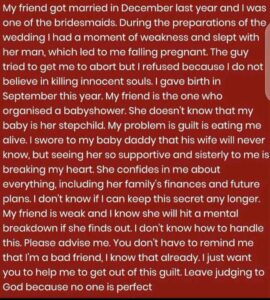