“I slept with my sister’s husband, but nobody knows” – Lady confesses (video)

In a viral video now, a young lady has openly confessed to having an illicit affair with her sister’s husband.

The young lady made this quite shocking confession during a vox pop, where the interviewer asked her to share a secret she’s never told anybody before.

Responding, the lady said she slept with her sister’s husband and nobody knew about her affair with him other than the two of them. 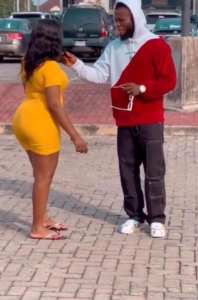 She went on to say that if her sister found out, she would be in big trouble and would have to flee the house.

The interviewer then asked her what would happen if her sister got to see the video, and she confidently replied that she wouldn’t.

In other news, A Nigerian slay queen has revealed that she and her likes have a way of infiltrating places where only decent girls are expected to be found.

She shared a video which captured her before vs after moment, with the first showing her in a typical slay queen skimpy outfit while in the latter, she wore jalabia and hijab.

The young lady noted that any man who goes to Mosque to look for a wife, will still see girls like her there, the only exception is that they will be looking different.

According to the pretty slay queen, the only difference that will be noticed is that when they go to places of worship, they will change clothes as seen in the clip she posted.