Big Brother Naija ‘level-up’ ex housemate, Chichi has expressed her dissatisfaction after one of the show’s sponsor booked an economy class for ex-housemates on their trip to South Africa.

Recall that, in October, Pepsi had announced an all-expense paid VVIP trip to Cape Town for all BBNaija season 7 housemates.

However, while speaking in a video she made before they arrived at their destination, Chichi revealed how unsatisfied she was with the economy class. 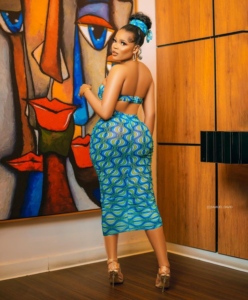 She further revealed that she upgraded to business class despite it being very challenging and stressful.

Meanwhile, Big Brother Naija TV star and also the season 7 edition winner, Phyna has taken to social media to express her excitement as she’s set to travel out of Nigeria for the first time.

The 25-year-old reality TV star, during a TikTok live session, excitedly told her fans about the trip while revealing that this will be her first time outside the country.

According to her, she’ll be touching down in Cameroon, South Africa, and finally, Qatar.