“I pray Yours will last forever” – Prayers trail Frederick Leonard’s wife, Peggy Ovire’s comment section as she opens up on her sisters’ marriages

Newly married Nollywood star, Peggy Ovire Leonard has been showered prayers by fans after opening up about her sisters’ marriages.

Peggy and her husband Federick Leonard have been on the spotlight following the news of their marriage.

Fans, friends and well wishers have since then showered the couple with lots of prayers. 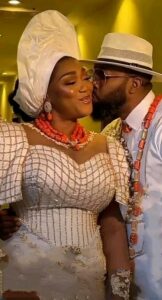 In a recent post, Peggy Ovire went on to reveal the highlight of her wedding night. According to her, the highlight was when her elder sisters prayed for her and blessed her marriage.

She further noted that her two sisters have been married for 30 and 21 years respectively.

“This right here was the highlight of the night for me, was raised in a family who puts God first in Everything & Grew up seeing my 2 big sisters Love God Fervently.

“The eldest (left) have been married for 30yrs & my other sister Gifty (right) Married for 21yrs & still counting….. don’t know how they do it but having them Cover us under Gods guidance, protection and Me following in their footsteps is a Blessing Never forget.” 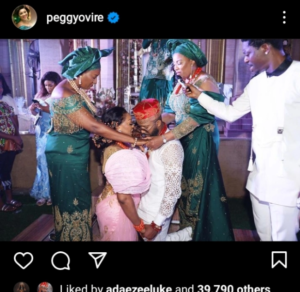 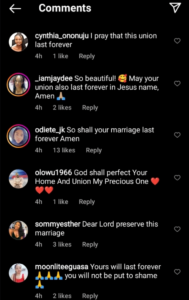 Massive crowd welcomes Phyna as she arrives South Africa with other housemates (Video).

Beauty welcomed like a Queen as she arrives South Africa (Video).

Beauty welcomed like a Queen as she arrives South Africa (Video).