Xxssive, the young boyfriend of popular controversial actress Nkechi Blessing, laments over the amount he spends on food daily.

Taking to his Instagram page, the socialite wondered whether he’s the only one spending exorbitant amounts on food everyday.

According to him, he spends between 40 to 50 thousand naira on a daily basis just on food and he’s already tired of doing so.

Reacting many wondered why his girlfriend, Nkechi, doesn’t cook at home for him.

xxssive replied: “@official_ladybj as per house help abi as per employed chef ?” 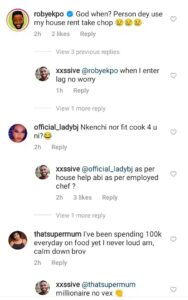