A video making rounds on social media captured the moment a young man arranged a group of guys to help empty his girlfriend’s chemist store.

The heartbroken man ended his 5-year relationship with his girlfriend after discovering that she was double-dating in Edo State. 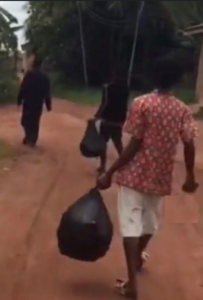 The man was said to have set up the business for the lady to help ease her financial burden and as a sign of his commitment to their union. 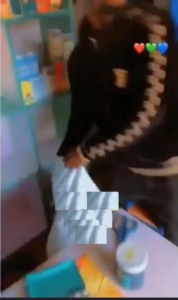 The enraged guy emptied the girlfriend’s chemist’s store after realising that she had a second partner aside from him in their 5-years relationship.

In other news, In a viral video, a young lady has openly confessed to having an illicit affair with her sister’s husband.

The young lady made this quite shocking confession during a vox pop, where the interviewer asked her to share a secret she’s never told anybody before.

Responding, the lady said she slept with her sister’s husband and nobody knew about her affair with him other than the two of them.

She went on to say that if her sister found out, she would be in big trouble and would have to flee the house.

The interviewer then asked her what would happen if her sister got to see the video, and she confidently replied that she wouldn’t.